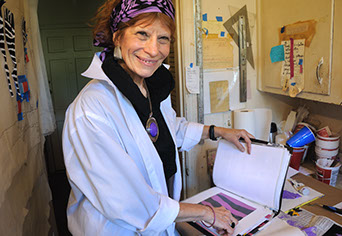 "Living among Italians, rather than
with other American students,
I developed a life-long interest in
cross-cultural experiences."

Jan Kern was born in Summit, New Jersey, and grew up there and in Sea Cliff, New York, a seaside village on Long Island an hour by train from New York City.

Granddaughter of a Swedish carpenter who let her play with leftover scraps of wood, Kern knew as a young child that she wanted to be an artist. That desire was rekindled in Italy, where she spent a year in the ancient city of Bologna while getting her Bachelors Degree in Political Science from Dickinson College, Carlisle, Pennsylvania. Living among Italians, rather than with other American students, Kern developed a life-long interest in cross-cultural experiences.

During the 1970’s, Kern studied for six years at night at the Corcoran School of Art in Washington, DC while building a career as editor of a magazine that helped communities with problems of hunger and poverty. At the Corcoran, she received departmental awards in design, printmaking, and visual communication. 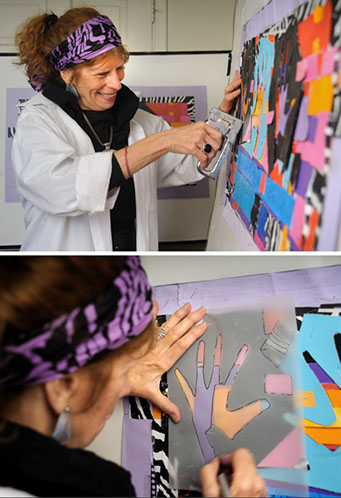 "I compose first, then for each layer make a detailed map.  In this way, I am able to capture the excitement I feel the moment that I have resolved a composition."

I am always doing something, whether it is learning more about the history of visual expression, collecting scraps, organizing notebooks, composing, painting, gluing.  My work is, in different stages, playful and improvisational, highly structured and methodical.

My process starts with discovering or rediscovering some fragment that has caught my attention and made me want to put it into relationship with something else.

Then, working either on a small scale or with full-scale enlargements of visual details, I compose playfully for days, weeks, or months. I am constantly moving, adding and taking away until a draft composition is fully resolved, with each color exactly what it wants to be, each element where it needs to be.

For this draft composition, I work with what is at hand in my overflowing studio -- strips of canvas that I have already painted, printed papers, or a bit of fabric that happens to be the color needed. Finally, using this composition as a model, I reproduce it using only permanent materials. I begin by systematically mixing acrylic paints to match each color. Then, using a palette knife, I apply the paint to large strips of canvas.  When the canvas is dry, I cut it into pieces and, using maps that I have made of each layer of the initial draft, I glue the pieces individually to a strong support.

I developed this way of working over many years, experimenting first on a small scale. As a young artist in the 1970’s, my question was:  What do I want to do with color-focused abstraction?  I still remember the moment in my first studio when I sensed that, paradoxically, the answer was to put paint aside, at least temporarily.  Across the street, at what is now the Smithsonian Museum of American Art, I had just seen the work of an artist who, while in Paris, had scraped bits of posters off walls and built intimate collages that felt simultaneously very new and very old.

“That’s what I want,” I thought, “to somehow capture the feeling I get when I am in an ancient city or looking at a centuries-old textile from India, Africa, Central Asia, or Peru -- a mysterious connection across time, of lives lived, cultures interwoven, the human story with all its twists and turns.”

I began making collages of my own, training myself to become highly sensitive to what resonated both in my everyday life and in art and artifacts I saw in museums and books.  I was enchanted by the connections that popped up as I composed.

The beautiful indecipherable white marks on a steel-gray parking ticket carbon, left one day on my car’s windshield, reminded me of Egyptian stele. Off-white, weathered postage stamps from India, when placed next to a trio of turquoise triangles, reminded me of Navajo weaving.  A discarded, torn Disney umbrella sparked thoughts of the huge staircases at Monte Alban, a monumental pre-Columbian temple complex near Oaxaca, Mexico.

These small collages formed the basis for both method and meaning when I was ready to scale up and re-embrace paint.

My collaged paintings grew out of what I learned from these small collages:  that as much as my work is about color and abstraction, it is also about the deep cultural interconnectedness of the human family, and about the creative process itself.

I am fascinated by the interplay of chance and choice; by how a whole work grows from a tiny spark; by how memories are constructed and reconstructed (themselves a sort of collage, as is culture)…by how, in the words of Jonathan Lehrer, in his book The Decisive Moment,  "the human brain makes up its mind." 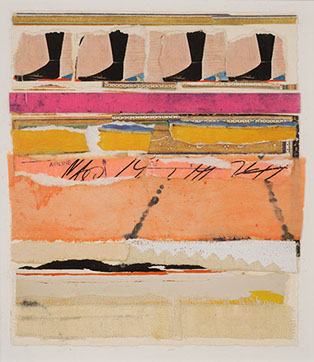 "My collaged paintings grew out of what I learned from these small collages:  that as much as my work is about color and abstraction, it is also about the deep cultural interconnectedness of the human family, and about the creative process itself." 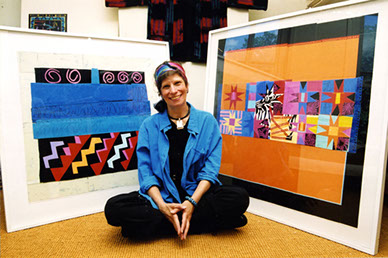 "The Textile Museum
opened my eyes and mind
like nothing else has ever done. I encountered colorful abstraction that was beautiful,
content-rich, and intimately linked to real life."

I was introduced to the idea of color-as-subject at the Corcoran School of Art in the 1970s. While I did not study with Gene Davis, I was enchanted by the visual power of his large bold paintings and sought out the work of other Washington Color School aritsts, especially Kenneth Noland, Morris Louis, and Howard Mehring.

Color-based abstraction was then widely exhibited, allowing me to compare various approaches. Of ongoing significance for my later work were: the crisp clarity of Ellsworth Kelly’s flat, saturated color blocks; the calm centeredness of Joseph Albers’ square-on-square series; and the mix of painting and collage in the work of Abstract Expressionist Conrad Marca-Relli.

Pioneers of Modern Painting and Photography

The Phillips Collection introduced me to the work and writings of key modernists: abstract painters in France, Germany, and the United States; American photographers like Edward Weston, Walker Evans, and Henry Callahan. Of particular interest were the following: the important role indigenous art and folk cultures played in shaping modern art; Kandinsky’s famous ideas about how abstract painting could convey feelings through arrangement, the way music does; the mesmerizing color and compositional inventiveness of Sonia Delaunay and Henry Matisse.

Western Artists and a Wider World

Artists who looked beyond Western art held a special fascination for me. Looking for role models, I noticed, for example, how Robert Motherwell was drawn to Asian philosophy and calligraphy; Louise Nevelson to Pre-Columbian monumental architecture; Henry Moore to Olmec sculpture; and, much earlier, Vincent van Gogh to Japanese prints, and Pablo Picasso to African masks.

Textiles and a Personal Connection

The Textile Museum opened my eyes and mind like nothing else has ever done. I encountered colorful abstraction that was beautiful, content-rich, and intimately linked to real life. I saw inventiveness, cultural complexity, and tangible evidence of how individual lives are impacted by natural forces and big sweeps of human history. 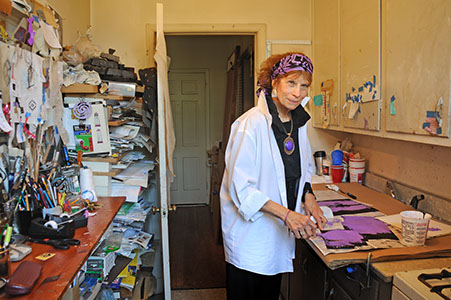 As a young woman, I learned to juggle a daily art practice and a professional job, starting with six years of night classes at the Corcoran School of Art.  It was a lot to juggle, but it taught me to be highly disciplined and gave me the resources to afford materials and working space.

A new ball got thrown into the juggling act in 1973 when I was diagnosed with a stubborn case of thyroid cancer, possibly caused by childhood exposure to fallout from A-bomb testing.  Two surgeries plus massive doses of radioactive iodine eventually resulted in a cure.  But my life and my art were deeply affected by insights gained from the complicated process then used to identify and treat recurrences.

For 15 out of 20 summers after the first recurrence in 1977, I would become what the doctors referred to as “SLOW” as a result of having to stop taking thyroid hormone replacement for several weeks.  Only then could nuclear medicine scans be effective.  As my metabolism slowed to a crawl, I would go from being a hare to a tortoise, barely able to move or talk.  Then, tests done, I would be rejuvenated as thyroid replacement medicine kicked in.

For a deep understanding of what a gift vitality is, there was nothing quite like it. My art continued to thrive, with nice feedback from more than thirty juried exhibitions and two solo shows, and in 2000 I was finally able to stop editing in order to spend every day in my studio. It was an odd year though; I began having a hard time following dinner conversations with my husband, Tom Grahame (an avid hiker, naturalist, and athlete whom I had met in 1978 when he moved to DC from Boston to work on energy legislation).  I wondered if perhaps Tom was losing his ability to explain the complex issues he studied in the health effects of air pollution; or perhaps I was having a hard time transitioning to my all-day, every day nonverbal work in the studio.

Actually, life was getting ready to offer me another insight:  this time into the remarkable complexity of the human brain. The day after Thanksgiving in 2000, two large brain tumors dramatically announced their presence with a grand mal seizure. 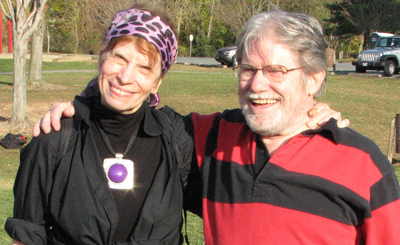 Just two weeks earlier I had celebrated with friends at the annual awards show of Artist Equity, where three of my large collaged paintings were on display, selected for inclusion by Virginia Mecklenberg of the Smithsonian’s Museum of American Art.

But I woke up that Saturday morning at Georgetown Hospital having lost my ability to follow what I was being told.

This was made clear when I was unable to repeat, as directed, an eight-sentence story about a king, told slowly to me by a neurosurgeon, who had brought a group of students with him into my hospital room.  When I managed to produce only the words “there was an unhappy king….”, the tall bow-tie wearing New Zealander turned to his students, pointed to the right-side of his own forehead, and said:  “Inability to follow dry narrative is indicative of pressure on the right frontal lobe.”

Tom’s sister in Alaska later recounted that she had noticed during the previous summer that I had frequently changed the subject of our dinner table conversations, directing them to things that had more emotional content and were therefore easier for me to follow. Interesting how our brains compensate (and try to control circumstances).  The tumors were noncancerous and two brain surgeries, eight weeks apart, were successful.

Within days after the first painful surgery, I began to regain my cognitive ability, and for the first six months after that surgery, I felt like a puppy being given treats whenever something evidenced the great restoration.  A special thrill was when, in conversations with Tom, we both noticed me adding nuances or corrections.  For a while Tom even began liking to hear:  “Actually, that’s not correct…” until about six months later when he decided it wasn’t so much fun anymore.

For the next decade, I experienced a burst of creativity that continues to fuel new developments in my work.  Within the first year after the surgery, I made close to 200 small compositions that I envisioned as future large collaged paintings.

I also composed and completed a series of collaged paintings with stars as a unifying theme, inspired both by an ancient Peruvian textile with eight-pointed stars and by scientific explanations of how the elemental building blocks of life are, in effect, byproducts of dying stars. “We are all stardust…."

I am grateful for the passion I have for my work and for the energy that allows me to do it.

Photo courtesy of Tyrone Hamilton and The Hill Rag